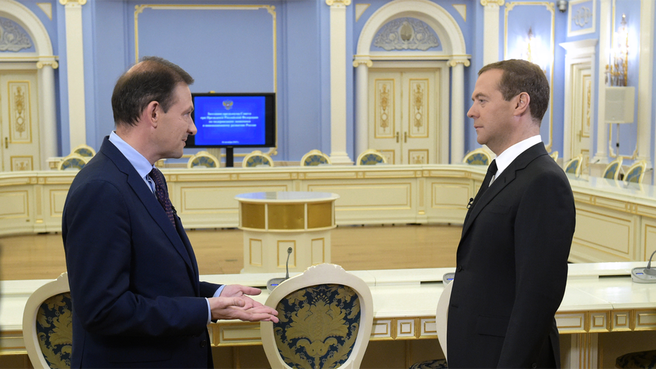 Sergei Brilyov: Mr Medvedev, thank you for taking a few minutes to talk with us. I’m aware that you came here straight from a meeting of the Presidium of the Presidential Council for Economic Modernisation and Innovative Development.

Sergei Brilyov:Unfortunately, my question is not about anything modern, but rather, the well-known archaic developments that are happening in world politics. I’m referring to the United States refusing to accept the Russian delegation, led by you, especially as you have good personal relations with President Obama. Were you surprised? What was your reaction?

Dmitry Medvedev: I think that personal relations don’t have anything to do with it. National interests always prevail. What happened? A major conflict has broken out, and it must be addressed. However, the current US administration has reacted in a fairly strange manner. By the way, it is routinely blamed for things that it can’t afford to allow itself, such as weakness, indecision and incompetence. On top of this, it is blamed for not taking appropriate measures to uphold its priorities. I’m not sure if this is the case, it’s up to them to decide. But judging by the statements that were made this week, including by some White House clerks, it seems to be true.

Let me give you a quick recap of the Syrian events. A conflict began there in 2010-2011. Our initial position was to refrain from taking any decisions aimed at undermining the authority of the current Syrian government. Next, the “Islamic State”, or ISIS, became a problem. The Americans proposed dealing with this evil jointly. We said yes, we think it’s the right thing to do, and we are willing to do it. The question is how. After ISIS began to spread like a cancer throughout the Middle East, we told them that we were willing to join the combined anti-terrorist efforts. However, to do so, we need a mandate from the Syrian government. Our country obtained such a mandate in the form of a corresponding request by Syria’s President al-Assad. Therefore, we have the necessary legal grounds to fight terrorism in that country. But how should we go about this fight? In order to fight anyone, you need to understand who the target is. In a collaborative effort with the Syrian leaders, we have identified several targets. The Commander-in-Chief made an appropriate decision, and the armed forces began their operations. The Americans are disgruntled. They are telling us that either the strikes or the targets are wrong. To our legitimate requests to provide us with the correct targets, they say they won’t do that. We say okay, but then at least show us which targets we should not attack, and they come back with the same answer. What kind of cooperation is that?

The Russian President decided to come up with a proposal to hold consultations with them. The fact is, our US colleagues keep telling us that this problem should be addressed in a comprehensive manner, and that it’s imperative that we agree on Syria’s future, discuss the fate of President al-Assad and resolve the situation politically. We have no objections to that – hence, the idea of a political delegation including specific members. Such a delegation would be in a position to discuss a variety of issues, ranging from the military all the way to political angles, focusing on a national dialogue and settlement. This seems to make sense. However, the US administration came back with a counterintuitive response, saying that they don’t need it, because Russia is behaving incorrectly, and such a dialogue is impossible. This is the situation.

Sergei Brilyov: When was Russia’s proposal to send a delegation led by you to the United States made public?

Dmitry Medvedev: It was quite recently, soon after the start of the corresponding phase of the military operation.

Sergei Brilyov: Not in New York during the consultations?

Dmitry Medvedev: No, not in New York. We behaved like partners in this sense. The President spoke with his opposite number, and consultations were held at the level of foreign ministers. But this message was sent after the military operations had begun.

Sergei Brilyov: I’m going to ask you a somewhat unrelated question. We have never discussed it with you before. You are originally from Leningrad, now St Petersburg. I hope you like the movie Pokrovsky Gates which is set in Moscow?

Dmitry Medvedev: I do, just like any other good Soviet film.

Sergei Brilyov: There’s a line where the main character – Kostik – asks someone to describe his feelings. He says, “What do these people make you feel?” Wait, I’ve even copied this line from the script to make sure I got it right.

Dmitry Medvedev: Well, it's a classic of Russian film, so quoting it is appropriate.

Sergei Brilyov: Yes, here you go. Here’s what he says, “Is it frustration, sympathy, compassion, or, perhaps, fondness?” And I'd add, perhaps, disappointment?

Dmitry Medvedev: Are you talking about the US actions ...

Sergei Brilyov: Your attitude towards the Americans.

Dmitry Medvedev: You know, I’ll put it this way: I think it's foolish behavior. By making such decisions or refusing to talk, the Americans are simply showing their weakness. After all, everyone can see that their activities in this region to combat ISIS have amounted to practically nothing, and ISIS continues to spread. Only Russia’s involvement has changed the situation. Still, they say that they won’t talk with us. This, I believe, is a shortsighted and weak position, because strong and responsible leaders and states accept offers to hold talks even in situations where the parties may see things differently. In any case, we never avoided talks. Let’s wait and see. As our President said, we are open to discuss any issues, and I’m here to say it again.

Sergei Brilyov: Here’s my last question about this. There was a feeling that the people with whom you were supposed to go to Washington – representatives of the General Staff and the Defence Ministry – were going there to discuss purely military matters. However, since the delegation was to be led by you, you were bound to discuss ways to achieve political settlement. Is that right?

Dmitry Medvedev: That’s exactly what our US colleagues said in a surprised tone, “So, you want to discuss political issues?” Indeed, Russia, the United States, and all other states that have a stake in seeing peace in this region and in Syria, and a strong government, too, should be discussing precisely political issues. It doesn’t really matter who will be at the helm. We don’t want ISIS to run Syria, do we? It should be a civilised and legitimate government. This is what we need to discuss.

Dmitry Medvedev: No, absolutely not. It’s up to the Syrian people to decide who will be the head of Syria. By the way, Syria is a multiethnic, multi-faith and a fairly complex nation. It’s up to the people to decide. At the moment, we operate on the premise that al-Assad is the legitimate president. I may be one of the few who was in Syria before the war, and saw what Syria was like before the war. I can tell you that it was a strong and quite modern state...

Sergei Brilyov: Well, not without authoritarianism, but peaceful.

Dmitry Medvedev: Yes, a peaceful state, absolutely right. Monuments were not destroyed there, and the economy was good. Now, it has become a mess. This is the most unpleasant outcome of the recent developments. So, of course, we are not fighting to back specific leaders. On the one hand, we are defending our national interests. The President said that if we don’t destroy these terrorists there, they will come to Russia. On the other hand, we received a request for help from legitimate Syrian authorities. This is where we proceed from.

Sergei Brilyov: So, we’ll be waiting for the Americans to come to their senses?

Dmitry Medvedev: We’ll see what kind of decisions they are going to make. Anyway, I reiterate: Clearly, our country has made the first step in this area, and we are open to dialogue.