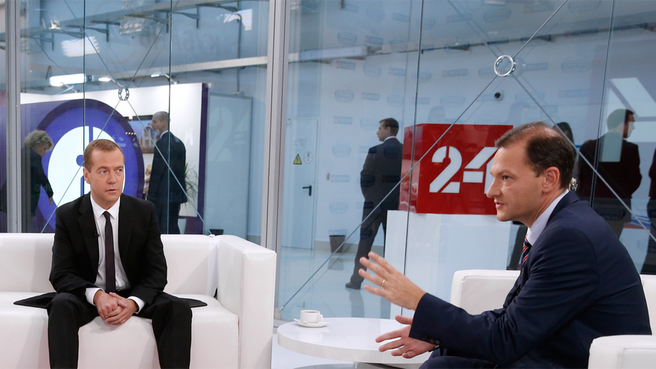 Sergei Brilev:  There is certainly the Syrian direction. I would like to ask you about the economic underpinnings of the unfolding events. Because when Russian air force strikes against Syrian targets were launched, many ideas and conjectures emerged as to what lies behind it. One such theory is that Russia is defending not just international law and Syria’s secular regime but also its own weapons market. Another hypothesis I read recently says that if Russia does not protect Assad, then Qatar will be able to lay a gas pipeline to the Mediterranean and overshadow Russian gas supplies to Europe. In part, Russia is conducting the operation for those reasons.

Sergei Brilev: That’s right, a conspiracy theory. But is there an economic motive behind Russian air force strikes against terrorist targets in Syria?

Dmitry Medvedev: The President gave a comprehensive account of the reasons for this decision. He explained what we are defending in this case. And it is us that we are defending: we are defending the people of Russia from the terrorist threat. Because it is better to do it abroad than to fight terrorism inside the country. That is why I can neither add nor take away anything from his account; it is exhaustive and absolutely accurate. Regarding the economic aspect, you see, we have economic relations with Syria and with Arab countries, but, how could I put it plainly... We have no crucial economic interests in Syria. We do sell weapons there but the amounts involved are not huge; several hundred million US dollars, maybe. And I am sure you know that the total portfolio of our [defence] contracts amounts to 15 billion US dollars. In other words, we do not have any extraordinary economic interests. This is why all that talk about keeping someone away from somewhere, which pipeline to annihilate, who to back where…

Dmitry Medvedev: Yes, all that is just a conspiracy theory or propaganda that is naturally being used in such a situation by a number of countries.

Sergei Brilev: The last thing I want to ask you. Just before the interview somebody asked me: You will probably have a question about Syria and additional expenses for the Russian budget? So, are there any extra expenses in Syria now?

Dmitry Medvedev: The Army of the Russian Federation has been properly provided for in the past years. Which makes it possible, as you know, to pay servicemen good salaries and, on the other hand, to re-arm the army. Our military-industrial complex is doing fairly well now, and our army is becoming ever more up-to-date. Those budget expenses, those items in the budget will suffice for special military missions, including the mission which is currently underway in Syria.

The meeting, held via videoconference, focused on the results of the efforts to curb the spread of the coronavirus infection.
9 June 2020 Mikhail Mishustin approves Strategy for the Manufacturing Sector The strategy will increase growth in the non-raw materials sector of the economy.
8 June 2020 The Government relaxes restrictions on entry/exit rules for Russia The decision was made following citizens’ requests.
1
Show More