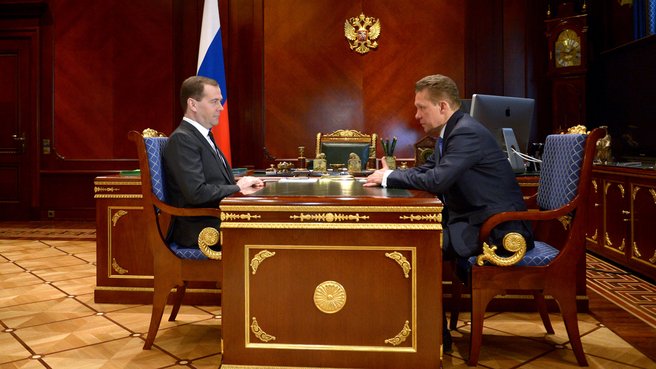 Dmitry Medvedev: How’s your year going? Is there anything interesting happening? Any positive developments?

We used traditional routes across Ukraine as our main supply routes. The volume of transit gas supplies to Europe across Ukraine increased in 2013 to a total of over 86 billion cubic metres.

We’ve been consistently increasing our supplies using other routes, such as the Nord Stream gas pipeline, which is used to deliver 100 million cubic metres of gas daily from Russia directly to Germany and other EU countries.

Work on the South Stream project, which is one of Gazprom’s priority investment projects, is on schedule. We’ve begun the construction of onshore sections of the pipeline in Bulgaria and Serbia. Gas supplies to Europe using the South Stream will begin in late December 2015. This will give us an additional gas exports route.

Dmitry Medvedev: This is a promising market, and in any case we should focus on this part of the world. It's good that you are close to reaching a final agreement. I hope that all these plans will become a reality, and we’ll obtain a separate and fast-growing market for Gazprom's gas supplies.

Now, back to the current affairs. How are our relations with Ukraine? Are there any new problems or is everything as it was?

At the end of 2013, we agreed that Gazprom would provide Ukraine with a discount on gas supplies on the condition that Ukraine would repay its debt for 2013 and pay for current supplies in full. Unfortunately, the fact is that the debt for 2013 has not been paid off.

Dmitry Medvedev: How much did they pay in all?

Alexei Miller: Slightly less than that. Ukraine’s total gas debt currently stands at $1.529 billion. Since Ukraine is not meeting its obligations and is not acting according to the agreements that were reached at the signing of the addendum to the contract regarding the discount, Gazprom has decided not to renew the discounted prices beginning next month.

Dmitry Medvedev: I see. People who don’t pay for the goods they receive must realise that they will suffer consequences, including the cancellation of earlier agreements on preferential terms of delivery. Still, what do you think should be done in order to have this debt repaid?

Alexei Miller: Ukraine owes Gazprom a considerable amount of money. Last year’s debt was deferred to Gazprom’s budget for this year, and this money is part of our investment programme. Therefore, the best thing Gazprom could do for Ukraine is to provide it with a loan in the amount of $2-$3 billion for it to repay its debt for 2013 and to pay for current gas supplies.

Dmitry Medvedev: It is no secret that 50% of the amount they paid was paid using a sovereign loan that we issued to them. Of course, this is one way to resolve this problem. I will instruct the Finance Ministry to weigh all the possibilities and challenges associated with Ukraine’s currently very low credit rating, and other aspects of Russian-Ukrainian cooperation in this area. In any case, Gazprom should insist on full repayment of debt by its Ukrainian client. This is my first point. Second, the decisions that you are taking to abolish the preferential terms of delivery appear to be perfectly legitimate in these circumstances.

Mikhail Mishustin had talks with Prime Minister of the Republic of Kazakhstan Askar Mamin.
1
Show More