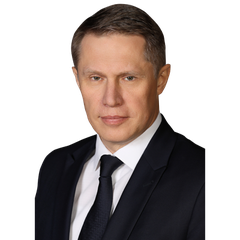 Minister of Health of the Russian Federation

1992: Graduated from the Order of the Red Banner Urals State Medical Institute.

1992–1996: Resident physician, obstetrician-gynaecologist at a regional hospital in Syktyvkar.

2011–2012: Head of the Obstetrics and Gynaecology Department at the Kirov State Medical Academy.

2012: Appointed deputy head of the Federal Service for Supervision of Healthcare.

2013–2015: Acting Head of the Federal Service for Supervision of Healthcare.

2015–2020: Head of the Federal Service for Supervision of Healthcare.

21 January 2020: Appointed Minister of Healthcare of the Russian Federation by Presidential Executive Order.

1999: Earned a PhD and in 2006 a DSc degree in medicine (in two areas: organizational healthcare and public health, and obstetrics and gynaecology).

The doctoral thesis was on perinatal care. Developed a modern model for rendering perinatal care to mother and child that has been introduced throughout Russia.

Has been awarded with the Order For Merit to the Fatherland, second class, the Medal For Merit to Domestic Healthcare, and the Excellent Worker of Public Health badge.