The agenda included current aspects of Russian-Belarusian cooperation, including in the context of integration processes within the Union State of Russia and Belarus. 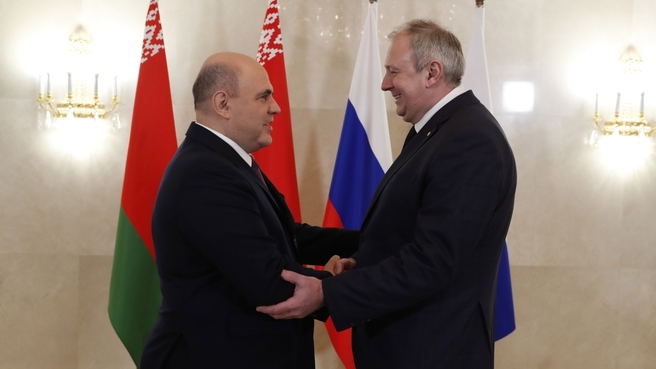 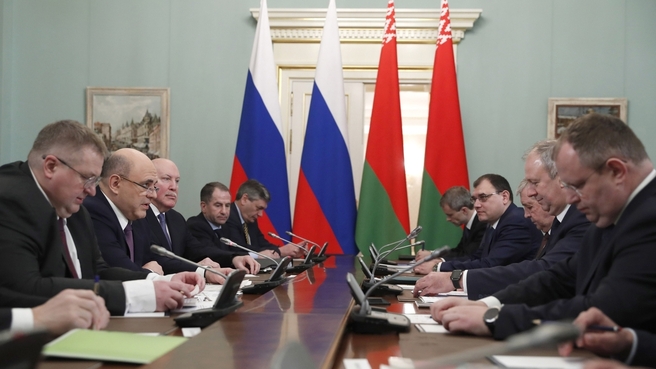 We are delighted to welcome you to Russia. This is already our second meeting. The first time we met was at a meeting of the Eurasian Intergovernmental Council held in Almaty on 31 January, and we also had several telephone conversations. Thank you for so promptly responding to our invitation to come to Russia to discuss the priorities of Russian-Belarusian cooperation. It is very important for us to act in close contact with our Belarusian colleagues and to coordinate our views on current matters.

I would like to point out that Belarus is our ally and strategic partner. On 8 December 2019, we celebrated the 20th  anniversary of the Treaty on the Establishment of the Union State. I am sure that we should take full advantage of the creative and integration potential of the treaty throughout this decade. This will help us to create favourable conditions for economic development as well as business and will ultimately improve the living standards in Russia and Belarus.

It is also important that Belarus is Russia’s leading foreign trade partner in the Commonwealth of Independent States. Looking at the past few years, we can say that our mutual trade amounted to $35.6 billion in 2018 or 9.6 percent more than the year before, and that our trade stabilised at this level in 2019.

It is notable that a decrease in Russian exports was compensated almost fully by the 4.5 percent growth of Belarusian deliveries to our market.

Russia still holds the leading place when it comes to cumulative investments in the Belarusian economy: they amounted to some $4 billion in January to September 2019. There are over 2,400 companies with Russian participation in Belarus. We can see the positive results of our interregional cooperation and our humanitarian, educational and cultural ties are growing ever stronger.

We have a packed agenda which I hope to discuss with you today.

I am honoured to bring this delegation to Moscow. Mr Mishustin, we are gaining considerable momentum: after the meeting in Almaty, we talked twice by phone in the past week alone. It is very good that our schedules allowed us to quickly coordinate this meeting so as to be able to resume the discussion we had in Kazakhstan.

We do have a packed bilateral agenda, and there are several subjects we need to discuss within the framework of our integration. I believe that the forward movement of the five member states will largely depend on the development of rapport between us.

As you are aware, our presidents have instructed us to prepare documents on an integration strategy, and our deputy prime ministers have done a thorough job. There are only a few disputable questions still to deal with. I hope that today we will be able to discuss them and move on to finalising this document at the Eurasian Intergovernmental Council meeting in Minsk on 10 April before submitting it for approval by our heads of state at the Supreme Eurasian Economic Council.

Mr Mishustin, you were right in saying that we have stabilised our trade, which we are maintaining at between $35 and $36 billion. According to the January data, our trade has decreased. However, we in Belarus are satisfied that our negative balance, which was as much as $9.6 billion ($8.4 billion in 2019), has plummeted to barely $100 million in January, which means that we are streamlining our trade. On the other hand, we know how we achieved this result – through energy deliveries, which is one of the subjects we plan on discussing today. I believe that the current situation with oil prices is bringing our positions ever nearer together and closing up the gap that exists between us if we take a look at the figures. This is a subject we will discuss today as well.

Mr Mishustin, I would also like to hear your views on the future developments because Russia is a key player on the petrochemicals market.

During the talks, Mikhail Mishustin and Sergei Roumas reaffirmed their interest in enhancing Russian-Belarusian cooperation and further strengthening integration within the Union State of Russia and Belarus and the Eurasian Economic Union. They also noted the importance of creating favourable and transparent economic conditions for the free movement of goods, services, capital and workforce, and touched upon sector-specific cooperation issues of mutual interest.

The prime ministers agreed to continue contacts on all important issues on the Russia-Belarus integration agenda.

After the meeting, Mikhail Mishustin and Sergei Roumas visited the Federal Tax Service of Russia, where they were shown the work of electronic digital services in the sphere of taxation.

Agenda: Draft federal laws, budgetary allocations.
27 May 2020 Prime Minister Mikhail Mishustin's telephone conversation with Prime Minister of the Republic of Belarus Sergei Roumas
26 May 2020 Meeting on support measures for the construction industry and housing and utilities services as part of the national action plan

The meeting was held via videoconference.
17 May 2020 Restriction on foreign athletes and coaches’ return to Russia lifted
1
Show More