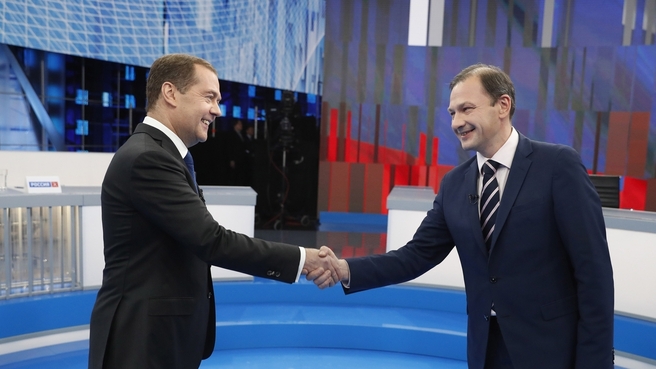 Sergei Brilyov: Mr Medvedev, you touched on Ukraine during your news conference, but didn’t say anything about gas. The Poroshenko party at the Verkhovna Rada said the other day that Ukraine does not need direct gas supplies from Russia. I’m looking at this and thinking: they do not need direct supplies as they get everything through reverse gas supplies...

Sergei Brilyov: On top of that, they want to be paid for transiting gas. So, maybe we should cut all supplies?

Dmitry Medvedev: This is impossible for a different reason. We need to think about European consumers and our Ukrainian colleagues as well. Regarding reverse supplies, we know this is our gas. However, Ukraine is getting it at a much higher price than it could otherwise. We have made this clear to our Ukrainian colleagues in various formats. The price can be decreased, but first we need to come to an agreement. How do people reach an agreement? As the fitter from Ilf and Petrov’s novel famously said, an agreement is the product of consenting parties. It’s impossible to impose anything on anyone. It is impossible to tell someone that their transit tariff will increase five-fold starting next year.

Sergei Brilyov: That is what Kiev is saying.

Dmitry Medvedev: Correct, that is what they are saying. Well, we will then call off everything. It’s impossible to reach an agreement on gas and then say: you know what, you still owe us money under a number of court rulings. So, whether they want it or not, clearly, we will end up at some zero-sum solution. Whether you like it or not, the solution should be mutually beneficial.

Sergei Brilyov: Can Russia tell European consumers that we will supply gas to them, but we don’t want them to send reverse supplies to Ukraine?

Dmitry Medvedev: This is fairly complicated to accomplish, in terms of in-process monitoring.

Sergei Brilyov: Well, yes, and they will also own gas by that time.

Dmitry Medvedev: We must take a look at European law. By the way, our Ukrainian colleagues are trying to implement European law. They were told to go ahead with it but make sure they implement it on time as it is quite strict. We don’t have any problem working under European law. But first we need to agree on the material variables of this deal. Then, we can resume cooperation, including our gas supplies to Ukraine. This, by the way, would be a truly cost-effective solution for Ukrainian customers.

Sergei Brilyov: Getting back to the Poroshenko party’s remark, in fact, Russia is dealing with a fourth Ukrainian President in less than 10 years.

Sergei Brilyov: Their politics often zigzag. Today, it’s Zelensky, but three years from now things might change again. Does it make sense to conclude a similarly long-term contract with Ukraine?

Dmitry Medvedev: You see, it’s not about who is at the helm, but about compliance with international commitments. We believe that the future leaders of that state must honour these commitments.

Dmitry Medvedev: They keep telling us they didn’t take this 3 billion, Yanukovych did, so they will not be giving that money back. But it wasn’t Yanukovych who took the money. It was the Ukrainian state, which is accountable for the debt, a fact recognised by all courts. The same should apply to gas. I hope the current leaders in Ukraine, the president and the government, realise this.

Sergei Brilyov: Can you imagine a scene that might seem impossible now? You come for a meeting of, say, the CIS prime ministers, lift the window blind after the plane has landed and see a Ukrainian plane on the runway.

Dmitry Medvedev: Why impossible? Never say never, all the more so as Ukraine remains part of the CIS. We don’t know what will happen in the future. In any case, participation in international formats is a good thing. Better to participate in meetings like this than avoid them. They help resolve issues. After all, all the problems in the world come from misunderstanding.

Sergei Brilyov: Get your window blind ready then. Thank you, Mr Medvedev.