Dmitry Medvedev delivered remarks at the opening of the congress. 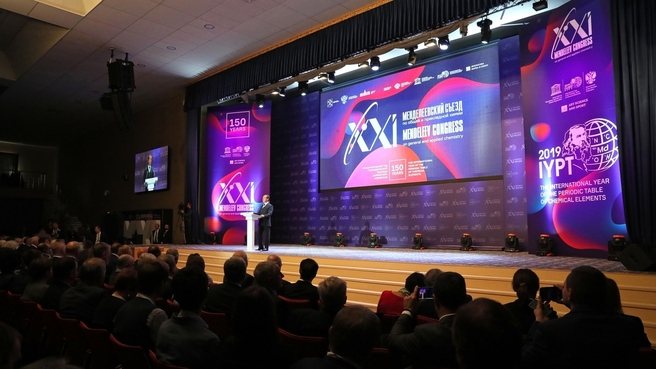 St Petersburg was the city where the 1st Mendeleev Congress took place in 1907, the year when Dmitry Mendeleev passed away, with the delegates honouring his memory. These congresses are held every four to five years at the main scientific and cultural centres nationwide and chart specific guidelines for the development of Russia’s chemical science, education and industry. By tradition, latest global and national achievements in the chemical industry are showcased there.

From 9 to 13 September 2019, St Petersburg is the venue of the 21st Mendeleev Congress devoted to general and applied chemistry. The event is dedicated to the 150th anniversary of discovering the Periodic Table of Chemical Elements by Mendeleev. The 21st Mendeleev Congress involves over 3,000 scientists, including 300 foreign scientists and Nobel Prize winners from 52 countries. Young early-career scientists under the age of 35 account for over 50 percent of its participants.

The congress’ academic programme consists of ten workshops, five English-language symposiums, a youth conference and four roundtable discussions. Congress’ themes encompass the main aspects of the development of chemical technology and the creation of modern materials on their basis. The congress is to involve Russian and foreign companies manufacturing chemical products and materials, including pharmaceutical substances. The participants will discuss various mechanisms for cooperation between chemical science and industry.

Dmitry Medvedev’s speech at the opening of the congress: 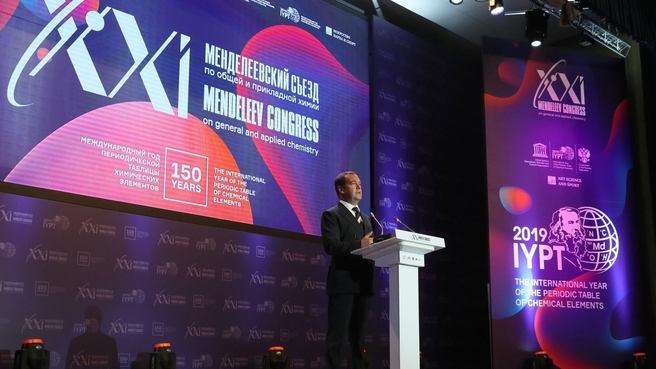 I would like to greet all the participants and representatives of various research forums at the Mendeleev Congress on General and Applied Chemistry. This is a special event for us, considering that the UN has designated 2019 the International Year of the Periodic Table marking the 150th anniversary of the discovery made by the outstanding Russian scientist, Dmitry Mendeleev.

The congress was named after Mendeleev more than 110 years ago, and both recent events and those that took place some time ago are connected to the scientist’s discovery. Some spheres of fundamental research and industry have appeared largely thanks to the ideas put forth by Dmitry Mendeleev.

We have just held a meeting with our respected colleagues who have come to this congress, the Nobel Prize winners and the leading researchers in the field of general and applied chemistry.

We talked about what this discovery means and how it changed what we knew about the universe, matter and the properties of substances. We also talked about the future and what can be done. After all, it was Dmitry Mendeleev who said: “It is impossible to apprehend the boundaries of scientific knowledge and prediction.” This is true.

For Russia, supporting promising research projects and talented researchers is part of a major national project. It is a government priority. We are seeking to do all we can in order to perpetuate the traditions established by the great minds of the past. Most importantly, we need to discover new talents capable of changing our world for the better. It is not a coincidence that more than a half of the participants at this prominent international forum are young people under the age of 35. This guarantees that new discoveries are ahead of us.

These days it is essential that research consists of cross-border cooperation and all research is global by definition. This is probably a good thing, since this erases boundaries and consolidates the foundation for international cooperation. Many remarkable discoveries are made as part of collaborations. This has been the case until now, and it will always be this way. We would like this to be the case for Russia, and we are ready to work with our friends and colleague researchers from various countries.

I strongly believe that the Mendeleev Congress will offer this opportunity, facilitating new contacts and stronger ties that researchers have always maintained, regardless of any momentary political considerations or tension that are short-lived. Scientific thought, on the contrary, is constant.

I would like to wish all of you every success in your work, productive discussions and of course an opportunity to get to know this marvellous city on the Neva, St Petersburg.

The meeting was held via video conference.
1
Show More