Prime Minister spoke with the press following a meeting of the Eurasian Intergovernmental Council. 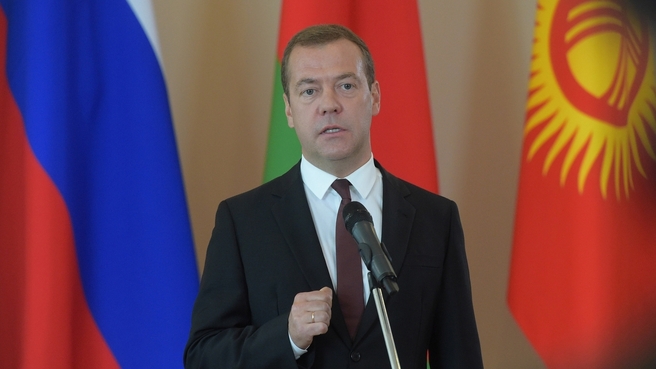 Question: With regard to the incident that took place in Crimea, the attempted terrorist attack by Ukrainian security forces, I would like to know what you think about Russia potentially severing diplomatic relations with Ukraine. Is it a possibility?

Dmitry Medvedev: The President provided a clear assessment of what happened there. Actually, it’s hard to add anything to what he said, but I’ll try, since you asked.

I believe this is, without question, a crime against the Russian state and the Russian people living in an area that is part of the Russian Federation – I’m referring to the Crimean peninsula. This act of sabotage – even though the plot was disrupted – is, in fact, a crime that should be duly investigated, and those involved, as well as its masterminds, should be held criminally responsible. This is common legal practice in such cases.

An investigation is underway. All information on this subject is readily available, and there’s lots of it. I can only express once again, as President Putin did, my regret over the fact that such an act was sanctioned by the government of a country that is close to us, even though this is a difficult period in our relations.

It is very unfortunate for our country and especially for the people of Ukraine, who are being distracted from domestic problems by this kind of terrorism and sabotage, to show them that “the Fatherland is in danger, and domestic issues will be deferred until we deal with certain external ones.” It’s absolutely clear that this is a ploy, an absolutely immoral one, that warrants the deepest regret and condemnation. But the legal process must be allowed to play out, as it is right now.

Finally, with regard to severing diplomatic relations. All kinds of things have happened in history. You may recall our relations with Georgia were severed following the events you are aware of, and there were other similar cases as well. I would not want it to come to that, but if we are left with no other options to remedy the situation, the President may decide to. The final decision, of course, will be taken by the President, who is in charge of foreign policy in our country.