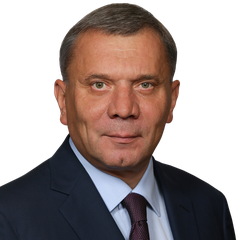 Graduated from the Kalinin Suvorov Military School in 1974, the Pushkin Higher Command School of Air Defence Radio Electronics in 1978, and Lomonosov Moscow State University in 1985.

1998−2004: Director General of the Modul Research and Technical Centre.

2004−2008: head of the radio electronics industry and control system department at the Federal Agency for Industries, and later deputy head of the agency.

July 2008 − March 2011: served as Deputy Minister of Industry and Trade of the Russian Federation.

March 2011: appointed First Deputy Chairman of the Military Industrial Commission of the Government of the Russian Federation.